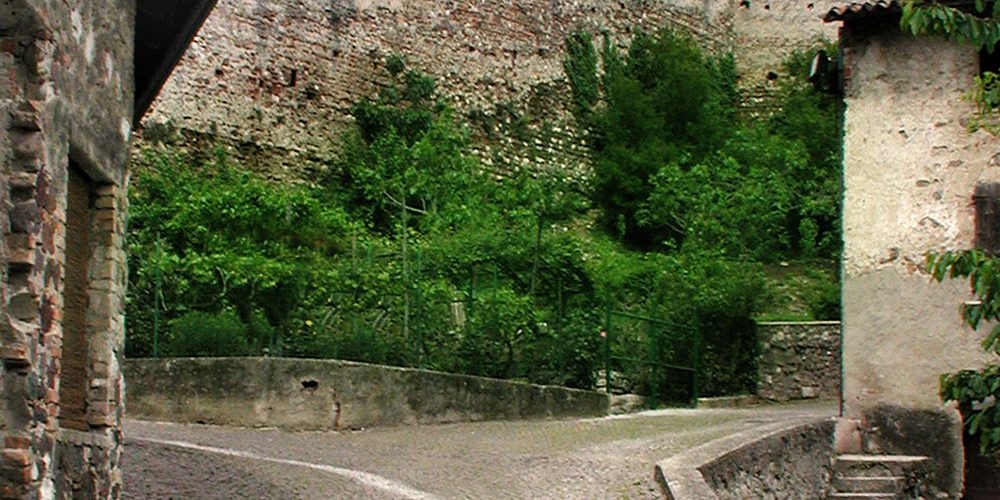 The castle-refuge of Monzambano, today defined as “one of the most intact and complete examples of castle architecture in the Mantua province” was built in the current form in the 13th century on the site on another fortification.
The perfectly preserved boundary walls surround the tops of two close hills separated by a slight depression and were rebuilt and adapted to the needs for strategic defense. In the Middle Ages Monzambano was in fact an important bridge-head for Verona and then for Venice, being set on the right of the river Mincio towards Brescia and Mantua.
You can access the castle through a single door on the east side, once equipped with a drawbridge for carriages and another one for people to cross the moat.
The main defensive area was set at the south-western summit of the fortification, with a huge fortified tower and probably another building at one side. This area was further protected by inner walls built in the fourteenth century. The defense system also included five more shielded towers, two on the corners and three in the middle, joined by a wooden walkaway as mentioned in a 1408 Venetian document. In this document some of the towers are identified with a name, the huge fortified tower was in fact called “the St. Mark Guard”, the two towers west were called “ the Country” and “the Gibelline” the bell tower was called “the Bell” and the entrance tower was called “the Verona Door”.