THE CHURCH OF ST. MICHAEL THE ARCHANGEL 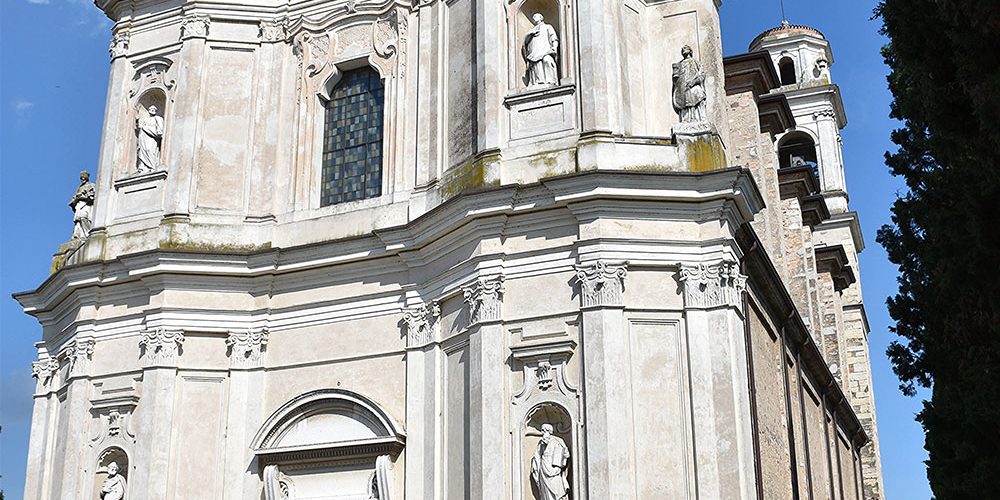 Facing the river Mincio valley, the parish church of St. Michael the Archangel in Monzambano was built on the site of another church between 1743, when the first stone was set, and 1777 according to the project of Architect Domenico Rossi.
The façade, built in the late-Baroque style and characterized by a wavy plan with strong vertical lines, is formed by two series of pilasters on a stone base, ending in a central timpani on which the statue of St. Michael is set.
It is a single nave church of long rectangular shape, the vault is decorated with frescoes such as The Multiplication of Loaves and Fish by Giorgio Telliè ( 1777).
In the walls of the nave we can see the beautiful statues of chalks of The seven Gifts of the Holy Spirit, each one standing in its niche, by Stefano Salterio (1730-1806).
Along the nave six chapels with altars are set, like the Altar of St. John the Baptist or of the Nativity with the 1767 altar-piece by Felice Cignaroli, representing the Birth of St. John the Baptist. Among the other altars, The Altar of St. Dominic with the 1793 altar piece by Agostino Ugolini, and the Altar of the Saints Roque and Sebastian with the painting by Giorgio Tilliè.
Fourteen tondo paintings of the Via Crucis by Agostino Ugolini decorate the nave.
The High Altar (1779) is a splendid work realized in the richest of materials and very fine marbles. It is attributed to the Corbarelli family, master carvers of Florentine origins who used the technique of the marble inlaying.
The altar piece of Saint Michael defeating the forces of hell stands out at the bottom of the apse in a marble frame recalling the marbles of the high altar. It was painted by Agostino Ugolini in 1802.