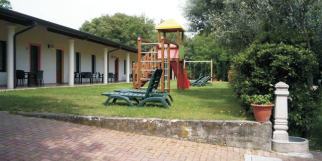 Lupo Bianco is set in the wonderful location of the Moraine Hills, surrounded by vineyards, wood, orchards and a private park. It disposes of seven accommodations composed by two bedrooms with bathroom to host from two up to five people, with a playground for children. The breakfast and restaurant hall are at the opposite. Lupo Bianco is only a few kilometres far from Gardaland amusement park, for which we are official ticket sellers.