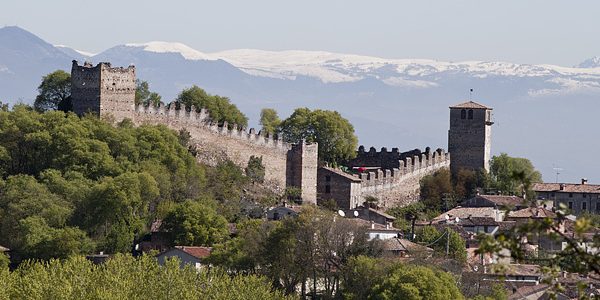 second home to Virgilio Latin poet, lies on the Moraine hills, just a few kilometers away from Lake Garda. Crossed by the Mincio river it has the same climate and the same vegetation as the lake. The landscape is evocative: the hills of the countryside are covered with vineyards and dotted by cypresses and olive trees.
Appreciated for its tourist itineraries, this hamlets give a warm welcome to its visitors in its local restaurants and farmhouses, where you can taste wine as well as dishes of the traditional cuisine of this territory.

What to visit
The Medieval castle represents an important part of Monzambano’s history. It was probably built in the period of Hungarian invasions, with a defensive function, as the walls seem to suggest. They were interrupted by guard towers, one of which was then turned into bell tower and it is now open to visitors on Sunday afternoon from April to August. From there you can get a wonderful view of the Mincio valley.
The ancient Church of San Biagio – dating back to the XVIII century – stands out within the walls too. It was rebuilt on the earlier parish church dedicated to Santa Maria (Saint Mary). San Biagio’s day is celebrated on 3rd February, when the inhabitants distribute wine and “fogasì” (a traditional hand made kind of bread) to their guests.

The main street coming down from the castle, leads to the Church of San Michele Arcangelo (Saint Michael the Archangel). Started in 1743 and consecrated in 1777, as indicated at the top of the apse. The interior is enriched with magnificent marble altars, such as the one dedicated to the Madonna del Rosario (Madonna of the Rosary) and the one devoted to San Domenico; the latest is also completed by painting by Augusto Ugolini, who is also the author of the 15 “Via Crucis” paintings. The most precious element of the church is the main altar, rich in inlaid marble elements and symbolic decorations.
Another hidden treasure of Monzambano is the Romanesque church called “Disciplina” (Discipline), with reference to the “Disciplini” monastic order.

The Municipality square (named after Vittorio Emanuele III) is a short walk away. From there, crossing via Umberto I, you can follow vicolo Balilla and reach “Piazzetta delle Arti e Mestieri”, a fascinating little square recently renovated, from where you can enjoy a breathtaking view of the Mincio valley.